Many families struggle with setting healthy boundaries with each other. Often, parents have different styles of parenting, which can sometimes balance each other out, but often feels inconsistent for the child. As children reach adolescence, they are more likely to push boundaries with their parents and try to create their own rules to live by. This can lead to parents trying to set stricter rules and expectations. However, teens are more likely to react by claiming that the rules are unfair to make their parents feel guilty. Without healthy boundaries and respecting other people’s autonomy, this can become a destructive family dynamic that turns into a cycle.

What is the Drama Triangle?

The drama triangle is a common model of human interaction based on getting needs met within relationships. Dr. Stephen Karpman came up with multiple drama triangle variations to describe how people relate to each other in different situations. Within the compassion drama triangle, patterns for getting those needs met include poor boundaries and unhealthy interactions. People are typically trying to gain a sense of control in their lives by pulling others into the drama. In this model, roles are considered interchangeable rather than a part of someone’s personality, which allows room for change. It is not uncommon for the drama triangle to become a pattern within families where one or more members of the family have experienced, depression, anxiety, trauma, or addiction problems. 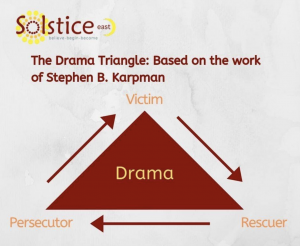 Who is the Victim?

Who is the Persecutor?

Who is the Rescuer?

The Importance of Improving Boundaries

It is important to recognize that there is not one specific role in the “Drama Triangle” that disrupts a healthy family dynamic. Instead, these roles work together to reinforce each other. As a result, if one person begins to work on improving their boundaries, other people will shift their behavior in response.

Solstice East is a residential treatment center for young women ages 14-18 struggling with behavior and emotional issues such as those that can stem from peer-relationship struggles. This program focuses on helping young women heal, recover, and integrate healthy habits into their lives. Students will learn to build healthy relationships, cope with emotions, and effectively communicate. Solstice East gives young women the skills and confidence they need to lead happy and healthy lives. We can help your family today!

Why We Screen Every Student for Childhood Trauma